Russian Song of the Day: Катюша

From an old article about the history of the song

My first introduction to this song was at the sweet little slapdash dinner that my Russian host-grandmother had thrown together for me when she found out it was my 20th birthday.  She invited her son, his wife and daughter as well as me and some of my American friends.  After dinner they insisted that we sing songs, which is customary at a Russian celebratory dinner. This was the first song they sang.  I was so impressed that they knew all the verses. I didn’t really know Russian at the time but this song stuck with me because I heard it all over the place.

You can read more about the song in English at the Wikipedia page.

What was really pathetic is that they then asked us American girls to sing a song for them we couldn’t think of a single song that we all knew.  I think we may have stumbled through a single verse of ‘You are my Sunshine’ or something, but we all felt ashamed that we didn’t have any traditional American songs to share with them. 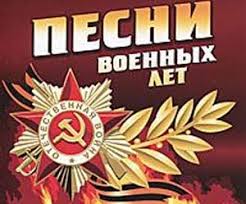 “Songs of the war years”

Russia has a rich tradition of folk songs, народные песни, and застольные песни (songs you sing around the table).  I would recommend learning some of them so you can participate in the fun.  Not to mention, Russians will be VERY IMPRESSED if you can sing all the verses of a Russian folk song, and since Катюша is one of the most favorite, I suggest it be this one.

History of the Song: This is a wartime song written about what was a common wartime theme; the man going off to war, leaving his sweetheart behind.

This song is especially popular on May 9th, or Victory Day and also on день защитников отчества, which is February 23. On TV you can watch all sorts of variety shows with folk singing and dancing and always, on this day, Катюша is sung.

I’ve always said that if you’re going to learn Russian you at least need to know two things about the culture and history: Pushkin and WWII. If you go to Russia ignorant of either, or heaven forbid, both of these things you’re going to make an осёл of yourself.

In the video below you can see very moving pictures of WWII and veterans.  It’s impossible for us Americans to comprehend what a war, let alone multiple successive wars can do to a nation.  WWII still tugs at many Russian emotions, even those in the younger generation because they know how much their people and their country suffered. This song evokes those emotions. I’m not even a Russian and I get choked up when I watch this video.

Some other wartime songs with the same theme that I like are: “Темная ночь” and “Синий платочек”

Having always been intrigued with Russia, I went over for a semester to teach English and decided that I would devote the rest of my life to the study of it. It's been 16 years and I'm still finding more and more that I want to know.

Theme by Anders Noren — Up ↑